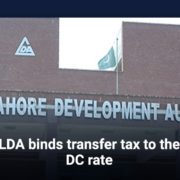 On October 19, news outlets reported that the governing body of the Lahore Development Authority (LDA) had approved a proposal to standardize the property transfer fee, NOC issuing, and map approval processes.

Instead of a flat price of PKR 7,000 per marla, the new fees will be based on the value of the DC, at 1% each marla. CM Pervaiz Elahi presided over the meeting where the decision was made. LDA’s fees for issuing NOCs, map certifications, and fines for breaking building standards and illegal construction laws would all be increasing under the new plan. In addition, the following changes have been made to the LDA Act of 1975 (as amended by Act XXVI of 2013):

Importantly, the LDA’s service costs have been adjusted after an eight-year hiatus to account for the dramatic rise in property values. The LDA has already announced that the new pricing structure will be implemented company-wide.