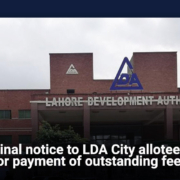 The Lahore Development Authority (LDA) has given plot allotees from the first and second balloting of the LDA City housing project one last chance to pay their unpaid development charges and keep their plots from being taken away. The notice was put in the most important newspapers.

Read more with EL news: Sindh allocates Rs460 billion for development in its budget for 2022-23

According to the already-publicized schedule for paying development charges, the 7th of 8 payments has already been made, while the 8th payment is due on Thursday, June 30, 2022.
Plot owners can get challans from the LDA’s website, www.lda.gop.pk, after entering their file number. These challans can be used to pay development charges, including the 8 instalments that are due.
Read: The LDA DG visits projects that are still being built and gives orders to speed up the work.

Challans forms can be turned in at any Allied Bank branch in the country or online through One Link.
If there are any mistakes on the challan form, allotees can go to the LDA City Directorate or call the WhatsApp number to have their information changed.
The exemption letter says that plot owners who don’t pay their development fees by June 30, 2022, will lose ownership of their plots.