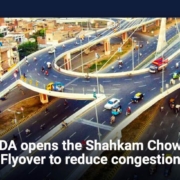 On July 10, news sources said that the Shahkam Chowk Flyover had been opened by the Lahore Development Authority (LDA) to help drivers during the holiday. The two-lane flyover project costs PKR 4.233 billion and connects New Defence Road, Kahna/Ferozepur Road, and Multan Road at Mohlanwal, as well as many housing developments, villages, and small towns.

Read more with EL news: White City-Pasrur permits the construction of residences with a deposit

The flyover has reportedly been opened to help with traffic during the Eid holidays. But finishing work on the project will go on for another 30 days after the flyover opens. This also includes moving electrical poles, making the flyover look nicer, and putting up traffic lines.

LDA Chief Engineer (II) Mazhar Hussain Khan said at a press conference that the project was finished on time, which is great news for people living in Multan Road, Defence Road, and Bahria Town. He also said that the project will help improve the area’s environment in addition to making traffic flow better. He also told the press about the PKR 5 billion Sheranwala Gate Project and the PKR 4.3 billion Saggian Road Rehabilitation Project.

The “Naya Lahore Development Package” was announced by the Punjab government.

He also said that both projects are on track and should be done in the next three to four months, as long as any problems with buying land are solved. He said that the LDA had finished all projects that were meant to improve traffic flow in the city. It is important to know that the government has set aside a lot of money to improve the roads in the city, especially at the entrances and exits.