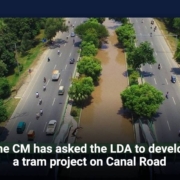 Mr. Buzdar demanded that the project’s design be finished first in order to expedite construction. He also emphasised that the project is critical for Lahore’s development. Because the tram would be ‘Pakistan’s first electric-powered tram system,’ the project will assist alleviate traffic congestion on Canal Road. Every effort must be made to complete it on time.

The development of the project is expected to begin shortly. Mr. Ahmad Aziz Tarar, Director General (DG) of the LDA, Mr. Naeem-ul-Haq, Vice Chairman (VC), and Principal Secretary to the Chief Minister were also present at the meeting.