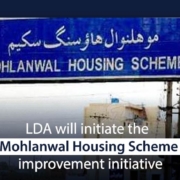 After 15 years, the project in question has finally begun. The LDA has given Project Concept-1 (PC-1) PKR 870,14 million for the whole project. This money will be used to build a road network, improve infrastructure, set up water supply schemes, and fix the sewage system. Reports say that the project has already been approved by the LDA’s governing body and that work will start by the end of this year. Under the approved PC-1, the following projects will be done:

Sources say that the LDA will pay for the whole project with its own money and not ask the Punjab government for money.