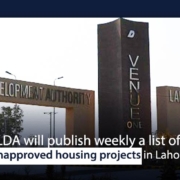 Lahore: The Lahore Development Authority (LDA) has decided to update the list of illegal housing schemes in Lahore every week, according to a post on the authority’s official Facebook page. This is done to raise public awareness.

The list will be updated on the LDA’s official website and Facebook page so that the public can learn more. LDA Director General (DG) Aamir Ahmed Khan told the media that the action was taken in response to directives from the Lahore High Court (LHC) and will be put in place to protect people from frauds related to real estate. He said that, according to the LHC rules, LDA has given each registered society a unique QR code with a number so that their transactions can be tracked and the investors’ hard-earned money can be kept safe. DG Khan also said that the authority is following the rules and has written to the Parks and Horticulture Authority (PHA) to stop illegal housing developments from advertising in the city.

It’s important to note that the LHC has told the LDA and other housing regulators to take specific steps to stop illegal housing schemes from ripping people off. In this way, the LDA has given each housing scheme its own QR code, which, when scanned, shows the scheme’s total area, the number of sold and mortgaged plots, and the number of commercial and residential plots.