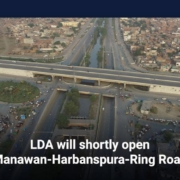 The Manawan-Harbanspura-Ring Road project will be finished by the end of next month, the Lahore Development Authority (LDA) said, according to a September 9 article in the leading newspaper.

The PKR 182.219 million Manawan-Harbanspura Ring Road project has been on hold for a long time, which causes traffic jams and pollution. Naeemul Haq, Vice Chairman of the LDA, said that the project is good for the public. The vice chairman started the project to fix up the Nayal Pul-Fateh Garh Road. During the opening ceremony, he said that the city’s authorities should put their attention on finishing projects like the Tajpura and Manawan sports complexes.

Also, the LDA officials (whose names were not given) told the LDA Vice Chairman how work was going on the Shahkam Chowk flyover, Saggian and other projects to improve road infrastructure, and sports complex projects.