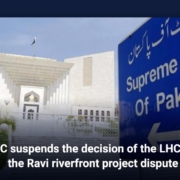 SC vacates LHC decision in Ravi riverfront case. In the Ravi Urban Development Plan case, the Supreme Court on Monday overturned the decision of the Lahore High Court (LHC), which had ruled against the project. The Punjab government can now keep working on the project.

The Lahore High Court (LHC) ruled that the project was “unconstitutional” because it didn’t have a master plan. The appeals court was hearing them.

During today’s hearing, notices were also sent to the people in the case, and the judge said that a review will be done to see if the appeal is an intra-court appeal. The Supreme Court suspends the decision of the LHC in the Ravi riverfront project dispute.

It will be sent back to the LHC if there is an appeal from another court, the bench added.

Before the hearing, the Supreme Court told the legal team for the Punjab government that they should have been more prepared when they came to the bench in the case.

“You don’t know what’s going on?” When AGP Owais couldn’t answer the question, Justice Ijazul Ahsan asked him about the case, too. “It looks like you haven’t been ready.”

In addition, AGP Punjab said that they were against the public hearing of the environment agency, and they asked for more help.

The justice said that according to the records, land acquisition for the project was also challenged. He said that the provincial government’s legal team should not misrepresent in court, and that they should not lie.

Here’s more: The PM hopes that the Supreme Court will help bring back the riverfront in Ravi.
Any plan that doesn’t have a master plan is unconstitutional, the LHC said on January 25.

The court also said that the proper way to buy land for the Ravi Urban Development project in Lahore and Sheikhupura was not used, so it called the practise of changing Section 4 of the RUDA Ordinance to make it easier to buy land “unconstitutional.”

A court order said that Section 4 of the RUDA (amendment) Ordinance 2021 is against Article 144 of the Constitution. It is against the law for Section 4 to say that it has been acquired.

Then, on January 28, Prime Minister Imran Khan said that the government would now ask the Supreme Court to take charge of the case.

There will be a better way to show the court how important this project is in terms of urban development and public facilities, the premier said.

PM Imran had talked about the important parts of the project, like the planting of twenty million trees as part of forestation, the building of barrages to help the water table, and the filtration of waste water.

It was the premier’s explanation for the ambitious $Rs20 billion project. He said that the riverfront project would create jobs and encourage foreign investment, and that an amount of Rs1.5 billion had already been paid in this regard.

The Supreme Court suspends the decision of the LHC in the Ravi riverfront project dispute.