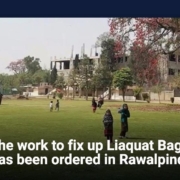 Rawalpindi: Noor ul Amin Mengal, Commissioner of Rawalpindi Division, has told the people in charge to fix up the historic Liaquat Bagh in Rawalpindi city.

When the Commissioner went to Liaquat Bagh, he told the director-general of the Parks and Horticulture Authority (PHA) in Rawalpindi, Xenia Humayun, to use all available resources to fix up the historic park and finish the project as soon as possible.

He told the DG PHA to fix the Liaquat Bagh platform with Chakwal stone, repaint the boundary wall, and connect the park to the nearby mosque.

The Commissioner also asked for a plan to improve the look of Liaquat Bagh and for funds to be sent as soon as possible so that the project could be finished in record time.

The DG PHA told the commissioner about the different projects that PHA was working on and promised that the Liaquat Bagh project would be finished as soon as possible.

It’s mandatory to note that the city of Rawalpindi has decided to build a memorial in the Liaquat Bagh, right where former Pakistani Prime Minister Benazir Bhutto was killed 15 years ago.

Even though the project had been approved and the Pakistan People’s Party (PPP) had said many times that they would build a monument and a memorial library at the site of the tragedy, they had not done so. As a result, former Prime Minister Benazir Bhutto was killed on December 27, 2007, after giving a speech at a campaign rally in Liaquat Bagh.

Even though the PPP became the government in the federation and Sindh province after the 2008 elections, a memorial for her could not be built where she was killed.

Now that the PPP is in charge of the whole country and has its government in Sindh, the Punjab government has decided to build a memorial. This is a big deal.