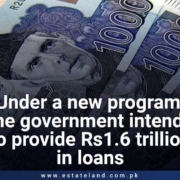 The government has decided to launch the ambitious Kamyab Pakistan Programme (KPP), which will disburse Rs1.6 trillion in discounted loans to 4.5 million impoverished households.

Governments have made similar proposals in the past, but they have never been able to entice the banking sector, let alone clients, due to their failure to embrace streamlined procedures. According to an official statement, Federal Finance and Revenue Minister Shaukat Tarin led a meeting of the Kamyab Pakistan Programme (KPP) Steering Committee and Advisory Board via video-link, which was attended by

The goal of the meeting was to fine-tune the procedures for the Kamyab Pakistan Program (KPP), which would begin soon. The minister greeted the private-sector participants and praised their professional abilities in their domains. He thanked everyone for their significant input/suggestions on the program and emphasized the importance of a collaborative and unified approach to ensure its success.

He stated that the program intends to help 4.5 million underprivileged households registered with the Ehsaas program’s National Socio-Economic Registry (NSER). In addition, entrepreneurs, tiny people in business, and farmers will obtain micro-loans with no mark-up and no collateral under the flagship program.

According to him, the program will help underprivileged families break the cycle of poverty. Under the “Kamyab Kissan” scheme will extend agricultural loans to farmers with landholdings of up to 12.5 acres. Micro-loans of up to Rs150,000 (per crop) would be made available to purchase agricultural inputs. Additionally, loans of up to Rs.200,000 would be made available to buy machinery and equipment. Another feature of the program is adding a new tier to the Naya Pakistan Low-Cost Housing Scheme, which loans Rs2.7 million (for NAPHDA projects) and will offer Rs2 million (for non-NAPHDA projects) at subsidized rates.

Similarly, “Kamyab Karobar” will grant small enterprises and start-ups loans at no cost in both urban and rural locations. The dairy, livestock, poultry, and fisheries industries will all be covered. Kamyab Karobar can take out a loan of up to Rs.500,000. Over three years, Rs1.6 trillion will disburse as part of the initiative.

The government’s ongoing skill development initiative for educational and vocational training, known as the “Kamyab Hunarmand” scheme, would be integrated into the program.