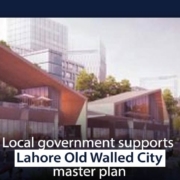 On November 8, news sources said that a PKR 10 billion master plan for the “Lahore Old Walled City” had been approved by the LG Department.

The approved master plan calls for fixing up old bazaars, rebuilding all 12 of old Lahore’s gates, and fixing up monuments and the homes of important public figures. The local government secretary has given the official go-ahead for the master plan, which will be carried out with the help of other municipal bodies. The plan calls for the following development projects:

Mubashar Hussain, the secretary of the LG, told the reporters that the project will be done to improve the infrastructure of the old city so that it is more appealing to tourists and looks like it did before.