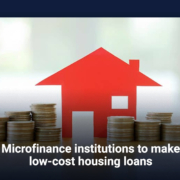 KARACHI: The State Bank of Pakistan (SBP) said that it has made it easier for microfinance banks to lend money to people who need low-cost housing and small businesses because of changes in prudential rules.

SBP: “Based on the steps taken in recent years to encourage financing for important areas, the central bank has revised prudential regulations for microfinance banks (MFBs) so that low-cost housing and small businesses can get the money they need.”

“This shows that MFBs can help people who aren’t getting the money they need, especially in rural and remote areas,” said the SBP.

Read more with EL news : The Centre approves a ‘world-class’ KCR for Karachi

The changes made to the prudential regulations are expected to help MFBs reach out to the low-income parts of the economy that aren’t usually served by banks, it said.

The SBP thinks that the new regulations will make it easier for people who make less money to get loans for low-cost housing and small businesses (MSE).

Thus, the revised prudential regulations will help to meet the needs of people who haven’t been able to get loans in the past, especially in the MSE and housing sectors, it said.

Yields on PIBs can rise up to 115bps.

On Wednesday, the government sold Pakistan Investment Bonds (PIBs) for more than $200 billion. The government increased the cut-off yields for different tenors by up to 115 basis points, which helped the government raise more money.

It raised Rs192.8bn through an auction and another Rs7.67bn through non-competitive bids, which is how much money it made.

The government got bids totaling Rs588.897bn, but it only raised Rs200.5bn from the public.