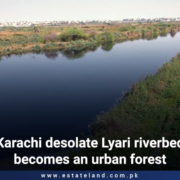 Karachi desolate Lyari riverbed becomes an urban forest. In Keamari area, fifty acres of arid Lyari riverbed have been turned into an urban forest, with thousands of native trees growing and producing fruit. The initiative, which began earlier this year and is being carried out by the forest department, has planted 73,500 trees on both sides of the riverbank from Mauripur bridge to Shershah bridge.

It is the initial phase of the Lyari urban forest project, which will expand to a greater area soon, said Maqsood Ahmed, district forest officer. These trees will aid in regulating monsoon floods, the prevention of sea intrusion, and the improvement of air quality in the area, he noted.

According to sources, the department has undertaken several plantation initiatives in Karachi over the past two years, planting thousands of native plants in areas such as Memon Goth, Shah Faisal Colony, Model Colony, Jinnah International Airport area, Gulistan-i-Jauhar, Bin Qasim town, Shaheed Benazir Bhutto Park in Clifton, and along the M-9 Motorway and National Highway.

“Since the commencement of the Green Pakistan program in 2018-19, the department’s activities have been strengthened. Because the department does not own land within Karachi, most of these plantations have taken place on the outskirts of the city. At the same time, the Lyari forest project’s site was personally chosen by [Pakistan Peoples Party chairman] Bilawal Bhutto-Zardari,” explained district forest officer Tahir Lateef, who claimed that the department actively monitored all plantation sites.

According to him, the department has planted roughly 320,000 trees in Karachi with its limited resources since 2019.
He expressed disappointment that there was no coordination with other agencies and departments in response to a question. “Everyone is working on plantations on their own. The district municipal corporations, the Karachi Metropolitan Corporation, and the several cantonment boards all have their respective responsibilities.”

Officials say the lack of a Karachi-specific law for tree protection and plantation and stringent tree removal restrictions unless approved by an expert committee is a significant impediment to the city’s plantation programmes’ long-term viability.

They highlighted a recent instance in Shah Faisal Colony in which 1,000 fully mature trees were taken down as an example.

“No one, including the police, was willing to collaborate, and we were unable to track down the perpetrators,” a forest official said, adding that the aim of making Karachi green would never come true unless a tree preservation law was enacted and adequately enforced.