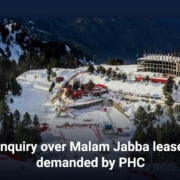 Inquiry over Malam Jabba lease demanded by PHC. The Peshawar High Court has asked the National Accountability Bureau (NAB) to provide a comprehensive report on its investigation into the high-profile Malam Jabba property lease issue and its decision last year.

Justices Roohul Amin Khan and Ijaz Anwar expressed dissatisfaction with reports that the NAB had closed the Malam Jabba case in response to certain orders issued by the high court in October 2020, noting that the court never issued such orders and instead directed the bureau to continue its investigation.

It directed the bureau to provide results on its investigations into alleged irregularities in the Billion Tree Tsunami campaign and appointments to the Bank of Khyber. The court ordered the production of those reports no later than January 20.