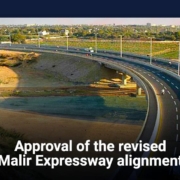 Approval of the revised Malir Expressway alignment. On Tuesday, Sindh Chief Minister Murad Ali Shah agreed to some changes to the Malir Expressway project suggested by the local government department.

At the 36th meeting of the Public-Private Partnership Board, officials suggested “minor” changes to the Malir Expressway in the Gadap and Memon Goth areas.

CM Shah was told that the changes were made to improve the project’s water flow and engineering design.

The officials said that the change in alignment would only need 10.3 acres of private land instead of 148 acres and save Rs3 billion in land acquisition costs.

They said that 204 houses were affected before, but there would be no more problems now.

At the meeting, the safety and security of the Jinnah Postgraduate Medical Centre, projects for regional blood centers, a clean blood supply to the National Institute of Cardiovascular Diseases, the Jhirk Malla Bridge Link Road project, and the Karachi-Thatta Dual Carriageway were all discussed. 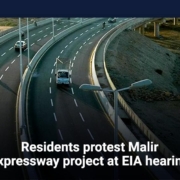 A public hearing was held by the Sindh Environmental Protection Agency (Sepa) on Wednesday to talk about its report on the environmental impact of the proposed Malir Expressway project. People living near the project didn’t like it.

Chairman of the PPP, Bilawal Bhutto-Zardari, started work on the Rs27.5 billion, a 39-mile project in December 2020. It would begin in Qayyumabad and end near Kathore.

Nespak and a private consulting firm, EMC Pakistan, wrote the EIA report for the project.

It doesn’t say what will be done to improve the climate and ecology, but Sepa says it’s still working on changes that will help.

They said the hearing was just a joke and that it was only there for the record. However, they were very concerned about the EIA report.

They said that the “facts” in the report were not based on “ground realities.”

Sepa gave him ecological data that said no species were found in a number that could be bad for the environment. He said that more than 10 mammals and 12 reptile species, including snakes, were found in the area.

Environmentalists say that Section 17(1) of the Sindh Environmental Protection Act 2014 says that no construction can start until an EIA report is done. But work on more than 15 kilometres of the project has already begun.

Read more with EL news : The CDA has yet to approve a parking lot in Blue Area Islamabad

They said that the ground levelling work had begun, and that the greenbelt was being ripped up.

According to Niaz Soomro, the project director for the Malir Expressway, no greenbelt will be cut down by this project. The machinery at the site is there to clear away debris and industrial waste.

A member of the NGO Climate Action Pakistan, Aadil Ayub, raised concerns about the damage to the climate that would happen because asphalt and concrete were used in the building.

Heatwaves would hit the city because of concrete structures. This could change the overall environment of Karachi.

During the meeting, a person also asked if the project was really for the people of Karachi or if it was to help real estate developers who had built communities on the outskirts of the city.

A presentation by an EMC environmental engineer said that the 38.75km-long and 30-metre-wide expressway would cost Rs27.5bn and take 30 months to build. This is what the presentation said:

People looked at a table of possible structures that might be affected and said that 366 homes, 31 businesses, 14 religious structures like mosques and shrines, three cattle sheds (three), four tube wells, and as many government buildings, like a cricket field, could be affected by the flood.

He added: “But, Sepa worked to mitigate and cut back on the damage to eight to 10 residential properties, and the changes are still being made.”

The report also said that 900 skilled and non-skilled people would be hired, and 50% of the jobs would be given to people who live in the area.

Resident groups and activists said Sepa was dishonest for sharing an 800-page report and setting up a meeting in 10 days, both in English. In addition, most people in the area didn’t speak English.

They also said that Sepa’s website was down for 10 days after putting the report on its website to make it public. This is what they said.

They gave a 39-page report called “Objections to the EIA for the construction of the Malir Expressway,” signed by Sepa deputy director Imran Sabir.