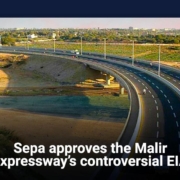 SEPA has given the go-ahead to the controversial Malir Expressway project, which has been under construction for more than a year, without taking into account the real concerns of local residents and experts about the environmental impact assessment (EIA) report, it was revealed on Sunday. The project is already worth billions of dollars.

Environmentalists and people who live near the project say that Sepa’s approval of an EIA mock the Sindh Environmental Protection Act 2014. Section 17 (1) says that “No project shall be built or operated until an IEE [initial environmental examination] or EIA has been submitted to and approved by the Agency.”

According to sources, work on the project started soon after it was opened by Pakistan People’s Party leader Bilawal Bhutto-Zardari in December 2020. So far, earthwork on the 15-mile-long section from Jam Sadiq Bridge to Quaidabad has been done.

The project will connect the city’s affluent areas with the newer gated communities that are forming on the city’s outskirts. It was made possible by a public-private partnership.

A 38.75-mile 3×3-lane expressway with controlled access will be built along the Malir river. It will start at the Korangi Creek Avenue (DHA) and end at the Karachi-Hyderabad Motorway (M-9) near Kathore through the existing Link Road.

Report: Sepa chief’s signature isn’t on it. Residents are making a mockery of the Environmental Protection Act by voting for a new term.

Karachi-Hyderabad highway M-9 to KPT interchange on the main Korangi Road will be completed in less than 30 minutes when it’s done, says the project’s EIA report.

It says the motorway will have the least impact on the environment and people because it will take less time to get there and there will be fewer land acquisition and resettlement issues. When heavy monsoon rains cause seasonal floods in the city, embankments will also act as a natural dam, it says.

In this case, ‘a recipe for disaster’

There are a lot of people who don’t like what is going to happen on the right side of the Malir river.

Read more with EL news : Contract won for the development of I-12 two capital markets subsectors

There are some people who think that if the government did this, old villages would be demolished and people would lose their homes, agricultural land, and heritage and religious sites. They also think that it would harm the biodiversity of the area, which is home to many different kinds of plants and animals.

Some experts also worry that the project would damage a lot of fertile land in Malir, which is one of the few green agricultural belts left in the middle of the city’s sprawl, providing fruits and vegetables and acting as the city’s oxygen hub. This is why they don’t like it.

They also think that the project could make it more likely for cities to flood.

In addition to its environmental significance, the district also gets a lot of attention from the government, but only during the election season. It’s one of the few places where the PPP has been strong for a long time, but there haven’t been any big changes for human development or public infrastructure.

In some ways, the party’s continued control of the province can be seen in this public attitude. It also explains why the government completely ignored its constituents in this important initiative despite their protests, a local activist said on the condition of anonymity.

People in the area, he thought, had a good chance to have their concerns addressed before last year’s by-elections on a provincial assembly seat. Then, they lost it.

sources said that one of the main problems with the project was that the government didn’t take into account people in the area before and after it began.

In the end, the government didn’t say anything about the project.” Most of the people who live in Malir’s rural areas are poor and have little or no education, so they can’t fight against the project, says an activist from the Indigenous Rights Alliance (IRA).

People lived on both sides of the Malir river, and the project would have a big impact on them, he said.

People, sources say, finally had a chance to be heard when Sepa held a public hearing last month, almost a year after the project began. The event was held without the director general in order to get people’s opinions on the project’s EIA report.

Lack of outside evaluations

It was a big deal that a document with all of the reservations on the Malir Expressway to Sepa was submitted at the hearing, sources said.

Among the groups that signed the document were Climate Action Pakistan, the Green Pakistan Coalition, Pakistan Maholiati Tahaffuz Movement, Karachi Bachao Tehreek, the Pakistan Indigenous Rights Alliance, and the Women Development Front, which is a group of women.

The document had a lot of problems with the EIA report, but two of them were about groundwater resources and ecological assets that were wrong.

210 permanent homes with 1,500 people and 49 temporary structures would be demolished for the project, while 6,635 acres of private land would be bought.

According to the sources, Sepa did not respond to these concerns, which is another violation of its own law.

There was a big difference between the report and the document, according to the sources. Sepa should have consulted with other groups about how to do the EIA.

When Naeem Ahmed Mughal, the director general of Sepa, was asked about the project, he said that the original alignment had been changed and that all major concerns had been addressed after the public hearing.

It used to take 130 to 140 acres of private land to build the project. Now, it only needs about eight to 10 acres. In this case, only eight to 10 homes would be affected. There is no library, historical, or religious site on its way.

Some wild vegetation can be seen, but there are no trees on the way. There’s also no danger to wildlife species.” Anyone who is hurt or inconvenienced by the project will be compensated by the project proponent, Malir Expressway Limited, he said. He added that he personally checked out the whole site and found no evidence of construction work.

Asked about the document sent to Sepa, he said that the purpose of the hearing was to listen to and record public reaction to the report, and that was done.

There are a lot of things the proponent must do before we give them the go-ahead. The head of Sepa said that his department will keep an eye on the work and yank the approval if there are any violations.

It wasn’t going to flood because it was built on the bank of the Malir river, he said. “It will, in fact, make its embankments stronger.”

It was a good idea for the director general to say that “people who truly represent the communities should be on board with these developments.”

The DG did not sign off on the EIA.

Asked why the project’s approval was signed by the deputy director instead of him, he said the whole process was under his control and there was nothing wrong with this.

Zubair Ahmed Abro, a senior lawyer who specialises in environmental law, disagreed with this. He said that the director general would need to sign off on the project.

In this case, he talked about an order from an environmental tribunal in the Seaview commercialization case.

Court rules that approval is an appealable order and must be signed by the director general himself, he said. The deputy director’s signature on the approval was against the law.

It’s also a law that requires the environmental watchdog, Mr. Abro said, to set up advisory committees with people from different sectors who can look over EIAs.

The fact that these committees kept not meeting, he said, was a violation of the law Sepa was supposed to follow.

“The Supreme Court has said that the provincial government must set up advisory committees under the environmental law, and not setting them up would be a breach of a statutory duty and make an EIA invalid,” he said.

This is not the first time that Sepa has approved an under-construction project, but it needs a professional review of the whole process in order to make the whole thing seem real.