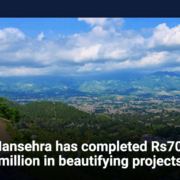 Mansehra has completed Rs700 million in beautifying projects. At a cost of Rs700 million, the district government has finished projects to improve the look of five tehsils.

These funds were approved by the provincial government for the tehsils of Mansehra, Balakot, Oghi, Darband, and Baffa-Pakhal.

Nazima Shaheen, who was in charge of making sure the beautification plans were carried out, told reporters that this was the first time the government had given such a large amount of money to such plans in the district.

She said that 44 plans to improve the look of five tehsils in the Mansehra district had been approved, and that work on 24 of them had been done or was in progress.

Ms. Shaheen said that the plans were meant to protect historical sites, put up monuments in important spots, build nullahs, and put welcome messages on mountainous and recreational areas, the Mansehra-Naran-Jalkhad Road, and the Karakoram Highway.

Read more with EL news : The Bhimber Dam construction will be completed in 2024

“Most of the 24 plans that were started after the money was given out are either done or almost done,” Ms. Shaheen said.

She said that the government had given Rs438 million so far and would give more as the work went on.

The official said that building nullahs or sewers around the Karakoram Highway and the Mansehra-Naran-Jalkhad Road would make sure that rainwater went to the right place and keep these roads from getting flooded.