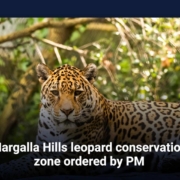 The PM also approved the Wildlife Information Centre at Marghazar Zoo. The decisions were made by the Prime Minister’s Climate Change Committee.

The Islamabad Wildlife Management Board (IWMB) reported increased leopard sightings in the Margalla Hills, particularly on trails 4 and 6.

The IWMB is working with the CDA to build fences and gates around trail 4, which will be closed at dusk. Trail 4 was opened earlier this month to reduce crowding and illicit wood cutting.

“The protected leopard zone will provide a healthy eco-system to predators permanently inhabiting the hills,” the PM Office cited him as saying.

He established a think group to coordinate efforts among ministries and create innovative ideas to combat climate change. Also, he noted, the KPK government’s signature “Ten Billion Tree” campaign had established Pakistan as a “Green Champion.”

A qualified workforce and advanced technology are required to preserve the country’s national parks, he noted.

The PM praised Special Assistant to the PM on Climate Change Malik Amin Aslam’s efforts to protect the environment and promote Pakistan’s efforts in this subject.

Read more with EL news : By 2023, the new Gwadar International Airport will be operational

The IWMB noted that, unlike Ayubia, no livestock attacks had been documented in the Margallas due to wild boar, monkeys, and barking deer.

The board also noted five leopards in the hills, indicating a healthy ecosystem. It further advised tourists to use caution on routes 4 and 6 and return before dusk as leopards travel between these paths, sleeping during the day and emerging at dusk.

“In the event of a leopard encounter, trekkers should freeze and exhibit no signs of fear,” the board recommended.

The IWMB recently released photographs of Shezadi, a female common leopard who lives permanently between trails 4 and 6 in Margalla Hills National Park. Shehzadi was caught on camera after IWMB workers set up traps for several nights in late January. Leopards guard 50 square km of land.

The common leopard is a critically endangered species and the park’s top predator.