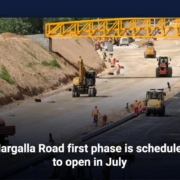 It looks like the carpeting for the 3-km double road out of the total 33-km road has been done and the construction of its side walls and dividers. The sewer system has also been built, and now the construction company is finishing up this part of the road.

Read more with EL news : China expresses willingness to expand the CPEC to include Afghanistan

Railway Bridge should be finished by May, which would connect the first part of the road with the rest. From this point, a small mountain has been cut down to make a one-kilometers area that is clear. A double road is going to be built in the next few weeks on the next two kilometers. The next two kilometers of levelling have also been done.

The issue of a graveyard that was blocking the alignment of the road has been worked out in good faith. So, the first phase of the project is likely to be done in the time frame that was set for it.

Phase two: In the second phase, an 8-mile road will be built from Murree Road near Quaid-i-Azam University. It will pass through Bhara Kahu, then link back up with Murree Road.