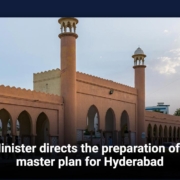 Hyderabad: Sindh Minister for Works and Services Syed Zia Abbas Shah has asked the competent agency to draught a comprehensive master plan for Hyderabad that will be included in the following fiscal year’s Annual Development Program (ADP) (March 15).

Read more with EL news : In the area of Hyderabad, a freight train comes to a stop

The minister visited Qasimabad to assess ongoing development projects and the newly constructed road connecting Poonam Pump to the Bypass in Hyderabad. Additionally, he said that the construction work was of a good standard. Further, the Minister directed the engineers to ensure that all necessary amenities are provided during the development phase to minimize complications.

According to Minister Shah, the city’s revitalization efforts are being planned in response to the city’s expanding population. He continued by stating that it is vital to prepare for the next 25 to 50 years, given the increasing number of housing developments. According to the minister, Hyderabad will receive a more favorable package the following fiscal year.