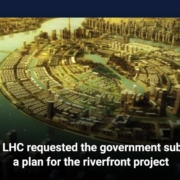 According to a government law officer, prepared the master plan in June 2021. Justice Shahid Karim, on the other hand, cast doubt on the claim.

The judge commented that if the project had a master plan, the provincial government’s or the Ravi Urban Development Authority’s (Ruda’s) lawyers would have submitted it along with their written declarations.

Additionally, the judge voiced dissatisfaction with the government for initiating the land purchase process well before the project’s Environmental Impact Assessment (EIA) approval.

The court erred in approving land acquisition before conducting an EIA. The LHC has requested that the Punjab government submit a master plan for the riverfront project.

Advocate Sheraz Zaka testified on behalf of the petitioners against the project. The Ruda conceded in its reply that the project’s EIA was still seeking approval by the Environmental Protection Agency (EPA).

Justice Karim stated that the process, in this case, appeared to have been chaotic, with the respondents, including Ruda and the government, failing to recognize the elephant in the room.

The judge ordered the government to produce the master plan by September 29 or face the consequences. The LHC has requested that the Punjab government submit a master plan for the riverfront project.

Ruda’s Reply: Ruda responded through its attorney Shazib Masud, asserting that the property acquisition falls squarely within the scope of public uses.

According to the authority, it was established to develop housing policies and programs, including but not limited to traffic, transportation, health, education, water supply, sewerage, and solid waste disposal.

It dispels petitioners’ concerns that the authority’s projects will be environmentally harmful.

Although the Punjab Disaster Management Authority is responsible for addressing smog, the Ruda plans to rehabilitate a water aquifer in the dying Ravi and construct a massive water reservoir with 270 billion litters via lakes and barrages on the outskirts of a megacity like Lahore.

“This single step would significantly reduce air pollution,” the Ruda asserts, adding that the initiative also intends to improve the environment through the planting of more than six million trees in addition to the urban forest.

Additionally, it claims that the project would assist in meeting 50% of Lahore’s demand for safe drinking water. The LHC has requested that the Punjab government submit a master plan for the riverfront project.

The Ruda asserts that the petitioners’ worries about the project are “misconceived and founded on irrational fears.” It requests that the court dismiss the petitions in the interests of justice.