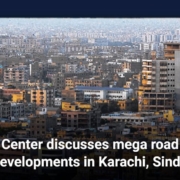 Center discusses mega road developments in Karachi, Sindh. The conference was presided over by the head of the 6th Coordination Committee, which is formed of representatives from the Sindh Government and the federal government, and discussed land development concerns related to the Mauripur Expressway and IC Interchange Project.

According to the participants in the meeting, the Request for Proposal (RFP) for the Mauripur Expressway and IC Interchange Project was released in June of last year. Technical bids were launched in September, which is significant. The project’s locations, such as the interchange at Lyari Bridge, the elevated U-turn, the Marine Academy Flyover, the Kakapir Road Widening and Flyover, the Salt Field Area, the ICI Flyover Ramp, and the ICI Flyover connections, are all under the jurisdiction of the Karachi Port Trust (KPT), Pakistan Railways (PR), and the National Highway Authority (NHA) respectively (NHA). The NOCs of these departments are expected to make further advancements in the project.

In response, the coordination committee authorized implied departments to give certificates of no objections, allowing the project to be launched. While considering the rehabilitation of the Gujjar and Orangi Nullah people, the meeting took action to reduce the Right of Way (RoW) to 20 feet in width. Following that, a wall along the Nullah will be constructed within 2 feet of the Nullah, and a two-lane road project will be constructed.

PC-1 for their immediate rehabilitation was tabled before the Planning and Development Department for approval, and PKR 1 billion of the PKR 2 billion budgeted for the project has been released, according to the meeting’s directive.

Mega road improvements in Karachi and Sindh are being discussed at the center.