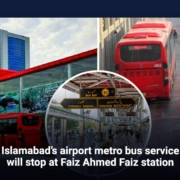 To do this, a bay is being built at Faiz Ahmed Faiz Station near the tax office and the Higher Education Commission building.

As of Monday, both metro services will be merged into one. Once the two services are linked, people who live in Secretariat and Saddar can go to Peshawar Mor, Nust, and Islamabad International Airport (IIA) on the side of the city.

People at Faiz Ahmed Faiz Station are working on a bay to connect the metro, a CDA official said. The work will be done by Sunday, he said.

Read more with EL news : Arrested Development: The 34 historic sites in Punjab need to be restored

An official says a bay is being built at the station, and it should be finished by Sunday.

PM Sharif opened the Peshawar Mor to IIA Metro Bus Service on Monday, a project that took four years to finish. In Ramazan, the bus service is giving free rides to people who want to go.

About 8,000 people took buses daily. That’s what a person from the CDA said.

9,900 people used the service on Tuesday, he said. He said that in the coming days, when universities open, the service will see a lot more people.

Another bus service, called the “Blue Line,” is also in the works between Rawat and Faizabad, says the official. It could start in a few months. he also said a feasibility study would be done to see if there was a way to run metro buses between Bhara Kahu and Peshawar Mor.

On the other hand, sources say that the CDA also signed a contract worth Rs980 million on Tuesday to install an Intelligence Transportation System (ITS) and a Command and Control System for the Peshawar Mor IIA metro service.

In four months, the project will be done. However, officials said there were also QR code tickets and other manual ways to run the service. It was also said that a contract worth Rs2.5 billion had been signed for the metro service to run and be maintained for 10 years, the people said. But when the ITS system is set up, the contract will start to be signed.

When the PML-N government took office in 2017, work began on a 25.6-mile metro bus track worth $16 billion. It was supposed to be done in a year. However, after the government changed in 2018, the project took a long time.

Project: The National Highway Authority (NHA) was in charge of the project. The CDA took it over last year and started the process of buying buses and setting up ticket and command systems.

A few months ago, the CDA hired a company from outside China to make 30 buses for the service in China. The buses were supposed to arrive in Islamabad last month for the project to open on March 23. Unfortunately, they didn’t make it in time.

They could not be sent to Pakistan because of the Covid-19 cases in Shanghai. They are now expected to arrive in Karachi on May 5, though. However, the CDA set up 15 buses from the Rawalpindi-Islamabad Metro Bus Service as a stop-gap measure.

As soon as the new prime minister took office, he ensured the CDA took steps to start a service in five days.