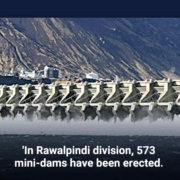 ‘In Rawalpindi division, 573 minidams have been erected.’ Dr Mohammad Iqbal Chauhan, Rawalpindi Division Director Water Management, said on Saturday that 573 mini-dams had been completed across the Rawalpindi division in the previous three years, including 216 in Attock area.

He was speaking with reporters here following the inauguration of a drip irrigation installation.

Additionally, a solar system has been constructed, which will power drip systems and conserve energy.

He stated that the water issue might be averted by limiting its loss.

In response to a question, he stated that, similar to other districts in Punjab, the Punjab government is implementing drip and sprinkler systems in the Attock and Rawalpindi divisions through 60 percent subsidy programs.

Dr Chauhan stated that numerous initiatives are being implemented in the Rawalpindi division, most notably the installation of drip irrigation systems to avoid water wastage in farms and alleviate water scarcity in canal areas.

Sikh pilgrims from India are scheduled to arrive on the 20th.

Sikh pilgrims from all over the world, notably neighboring India, are slated to assemble in Hassanabdal on Nov 20 for a three-day holy pilgrimage commemorating Baba Guru Nanak’s 552nd birthday.

Imran Gondal, deputy secretary, shrines, Evacuee Trust Property Board (ETPB), told reporters here that approximately 3,000 Sikhs from India would visit Gurdwara Punja Sahib Hassanabdal. In contrast, over 1000 from other parts of the world, particularly the United Kingdom, Canada, and the United Arab Emirates, would also visit.

He stated that religious ceremonies like the Punja Sahib yatra, Matha Taki, and Ashnan would be conducted in accordance with the Covid-19 health safety policy.

Additionally, they will pay a visit to Baba Wali Qandhari’s shrine on the mountaintop and recite from their holy book Garanth Sahib.

In response to a question, he stated that the Pakistan Sikh Gurdwara Parbandhak Committee (PSGPC) and the Evacuee Trust Property Board (ETPB) had made meticulous provisions for the visiting Sikh devotees’ security, boarding, and accommodation.

He stated that police commandos and elite force officers would be assigned security duties and that the board had installed surveillance cameras inside and outside the gurdwara.