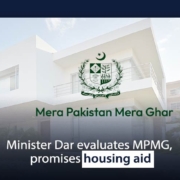 Senator Mohammad Ishaq Dar, the Federal Minister for Finance and Revenue, led a meeting on Wednesday, November 16 to review the progress of the Mera Pakistan Mera Ghar (MPMG) scheme. The meeting was held in Islamabad.

Read more with EL news: The government will create a housing program for low-income families

The minister said that the government would keep supporting the markup subsidy for the masses in order to close the growing housing gap in the country. He also said that the government will fix the project’s operational and functional problems and improve its financial side. Chairman of the Naya Pakistan Housing & Development Authority (NAPHDA) Lt. Gen. Anwar Ali Hyder (Retd.) gave the minister an update on the project’s finances, progress, and features. The minister asked the people at the meeting to come up with a real and long-term solution to the mortgage crisis, as well as to ask for help from the government to fix the problems with the current programme and make it work better for the public.

It’s important to remember that the MPMG project began in 2020 to meet the housing needs of the country. But in May of this year, the government stopped funding the project, saying they didn’t have enough money. They planned to restart the project after reorganising it for a competitive market.