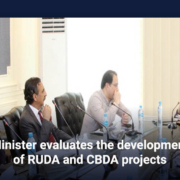 The minister looked at how the multibillion-rupee development projects were coming along. The minister said at the time that both projects are important for making Lahore a modern city because they will help a lot with the country’s growing population, environmental problems, and housing shortage. He told the people in charge that the government would do everything it could to help both projects get done on time. He also said that the projects would put two million people to work and move between four and eight million people. The new industrial zone in Ravi City, which will cover 3,500 acres, will be a big step forward for the country’s growth.

It’s important to remember that the government said the RUDA and CBDA would be built in 2020 as modern and smart housing options for the country’s second largest city. It will be the first project of its kind to have smart forests, green roads, high-end facilities, and buildings with more than one floor.