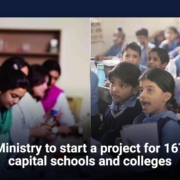 Ministry to start a project for 167 capital schools and colleges. Federal Education and Professional Training is about to start work on a huge project that will help 167 schools in the federal capital get basic things like electricity and water.

The Project Management Unit (PMU) of the ministry finished the first pre-qualification round. On Thursday, three big construction companies sent their documents to the PMU, which would be checked.

It will be up to the Public Procurement Regulatory Authority (PPRA) to make a final decision in the next few days, the PMU said. However, everyone who has sent in their documents has a lot of experience, so it is likely that they will all be qualified.

A group of firms called ZKB, Reliable, and a group called Metracan and Kasib Builders and Developers sent in their paperwork for the next round of qualification (KBD).

They said that after the pre-qualification round was over, the ministry would call for financial bids from qualified firms so the project could start. So we’ll find out in two months whether we’ll be able to work on this project.

More than 500 new classrooms will be built as part of the project. In addition, three auditoriums, 39 labs, 17 libraries, 148 toilet blocks, and servant rooms will also be built and renovated.

The project’s total cost is Rs6.7 billion, but work on it will be broken up into three separate parts.

There will be a lot of work done in the first phase, which is called “civil work.” Then, a second project worth Rs268 million for furniture will start before the last phase, which costs Rs589 million.

During the first fiscal year of 2021-22, the previous government set aside Rs409 million for the project. This money has been used.

Ministry and FDE officials said that most school buildings were in bad shape and needed to be repaired to improve the quality of education. This is what they said.

Working paper: “Project was prepared in light of the fact that FDE has mostly kept educational institutions that were given to it by the government of Punjab in 1973 and 1985,” the paper said.

Many of these buildings are in bad shape and need to be repaired quickly to keep students safe in a safe environment where they can learn well. Unfortunately, FDE schools and colleges don’t get any money to keep their buildings in good shape, the paper said, adding that the PSDP is the only source of money for schools and colleges’ physical infrastructure needs, whether they need to fix old buildings or build new ones.