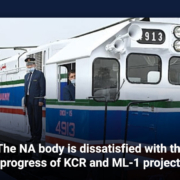 The NA body is dissatisfied with the progress made on the KCR and ML-1 project. More than a month after Prime Minister Imran Khan laid the foundation stone for the Karachi Circular Railways amid much media fanfare, the performance of the currently available and operational service came under severe criticism from lawmakers on Wednesday, who stated that the Pakistan Railways should undergo a massive overhaul to bring them up to required standards, which we’re currently deteriorating.

Members of the National Assembly Standing Committee on Railways observed the second part of their three-day journey and inspection of the KCR route.

“We travelled on tracks from Orangi Town to City Station [one of the KCR routes], and the trip was not pleasant. I even joked with officials from Pakistan Railways that a man on foot could cover the distance faster than this train service. It was painfully slow. With this rate of growth, how can you expect it to become a popular service? It serves no use at all,” he stated.

The $6.8 billion ML-1 projects would take eight and a half years to complete.

Similarly, he stated that overhead bridges and underpasses were critical for scaling up the KCR service since it would otherwise fail to achieve the intended outcomes. He mentioned several level-crossings in the central business district that needed to be renovated and stated that members from the lower parliament had recorded their opinions.

Read more with EL news : LHC declares the arguments against the riverside project are maintainable

Mr Wattoo also questioned the utility and effectiveness of the ML-1 project, which had been widely publicised and lauded by Pakistan Railways officials but had yet to take flight.

Following the briefing by Pakistan Railways, the NA body was convinced that the project entailed various benefits for the country and may improve the country’s transportation sector in the long run, although several formalities remained outstanding.

“We are dissatisfied with the progress [on ML-1] that has been made,” he stated. “We constantly hear about its benefits and advantages, but no one informs us of the project’s actual location on the ground. Numerous formalities, documentation procedures, and contractual needs are outstanding. We have not yet finished several tasks and processes with China that must be done before the tender. Then would put it up for tender and other considerations. As a result, we are a long way away. This performance is lacking in quality.”

“The authorities briefed the standing committee on the ML-1 project and the Karachi Division scrap auction held by Pakistan Railways five years ago. The committee was informed that the ML-1 project would be completed in three phases over an anticipated 8.5 years at the cost of US $6.6806 billion,” he explained.

While updating the NA committee on the money produced by the Karachi Division’s coach sale during the last five years, the official stated that halted the auction in 2016-17 due to low pricing. 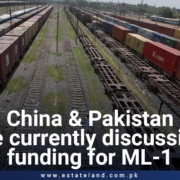 Pakistan has publicly requested that China provide loans in USD rather than Chinese RMB to construct the much-anticipated Mainline-1 (ML-1) rail line from Karachi to Peshawar or that a combination of both currencies be acceptable for moving forward.

Authorities have officially communicated five significant points to Beijing to agree on a finance deal for the multibillion-dollar, strategically crucial ML-1 project within the China Pakistan Economic Corridor (CPEC). On the other hand, Pakistan has officially responded to China’s request to finalize the funding deal for the ML-1 project. For the convenience of the Chinese side, the Chinese side wants to give a loan for ML-1 in RMB currency. However, Islamabad has declared that a loan in US dollars or a combination of US dollars and RMB currencies is preferred.

China has also offered Pakistan a package of attractive terms and conditions and commercial loans for the building of the ML-1 project. Still, the Pakistani side is only interested in granting lenient terms. The Pakistani side informed China that the Framework Agreement for ML-1 provides that, as a strategic project, Beijing will offer funding on more accessible terms. The project is about to finance on concessional terms by the Chinese side, following this stipulation. Therefore, in comparison to past CPEC Infrastructure projects, Pakistan will accept better funding terms.

There are disagreements over the Chinese part of the loan for the project’s construction, as Pakistan had initially requested a 90 percent Chinese share and a 10% Pakistani share. On the other hand, the Chinese side recommended that China’s share by 85 percent and Pakistan’s part be 15 percent for the ML-1 project’s construction. After tense talks, the Pakistani side accepted China’s offer of an 85 percent loan to cover the cost of the ML-1. The Chinese team also suggested a 15 to 20-year project duration; however, Pakistan contended that the construction of ML-1 might take ten years. The loan repayment time would take another 15 years; therefore, Islamabad proposed a 25-year loan duration with a 10-year grace period. China requested that must pay the principal and interest within six months. The Pakistani side agreed and accepted that the government would extend the guarantee to the Chinese loan amount.

The cost of upgrading the Kiamari-Hyderabad Section (182 km) and the Hyderabad-Multan Section (566 km) under Package-II approved at $2.67 billion, excluding work done on the Nawabshah-Rohri Section in Package-I. In addition, the ECNEC approved a $1.42 billion budget to build the Lalamusa-Rawalpindi Section (105 km), Rawalpindi-Peshawar Section (174 km), and the establishment of a dry port near Havelian under Package-III.