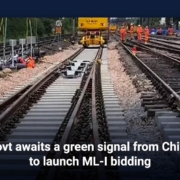 Govt awaits a green signal from China to launch ML-I bidding. The government has requested permission from the Chinese authorities to begin the tendering / bidding process for the CPEC’s Main Line-I (ML-I) project.

They will resolve any cost revision issues at a later date, the government says. It anticipates final approval of the ML-I bidding shortly.

“With the $6.8 billion projects already approved by the government, the ball is now in the hands of the concerned Chinese authorities. On Thursday, our site has no outstanding issues,” Pakistan Railways Chairman Dr. Habibur Rehman Gilani.

“They (the Chinese) are working these days feverishly to get the project approved,” he added.

About the possibility of increasing the ML-I bidding’s total cost, Mr Gilani stated that the Chinese had to do so if they believed there was a need to do so (keeping in view its scope).

Read more with EL news : A government building and a road will be named in honor of Dr. A.Q. Khan

“However, we have also requested that they permit us to initiate the tendering process.” And if the project’s cost increases by more than 15% in the future, we may have the project’s PC-I revised at a later stage. “I’m hoping they’ll take our request into consideration,” he stated.

The chairman stated that the Rs30 billion project for rehabilitation the 460-kilometre-long deteriorating rail track connecting Khanpur and Sukkur would be approved by the government shortly, as the PR had already sent a PC-I to the concerned quarters.

Sher Ali Arbab, Chairman of the National Assembly’s Parliamentary Committee on the China-Pakistan Economic Corridor (CPEC), recently told that issues regarding the approval of the ML-I would be on a priority basis.

“This is the $6.8 billion CPEC project that the government has already approved. According to the Chinese, the project’s cost estimation is not dependent on its components. They estimate it should be around $8 billion. As a result, we have requested that they revise, discuss with us, and justify the cost estimation revision, given that we will be paying interest on such a large sum of money,” Mr Arbab explained.

“They (the Chinese) are currently pursuing this.”