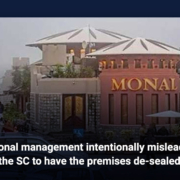 People in charge of the Monal Restaurant in ISLAMABAD were scolded by an Islamabad High Court judge on Thursday because they lied to the Supreme Court about getting their restaurant’s doors unlocked.

IHC Justice Aamer Farooq, along with Justice Miangul Hassan Aurangzeb, slammed the Monal management for misrepresenting what happened to the restaurant in the Supreme Court. However, the issuance of short order by a single-member bench of the IHC for the restaurant to be closed was not signed by that judge.

On January 11, IHC Chief Justice Athar Minallah ordered that the Monal Restaurant be sealed and that the IHC’s office take it over.

Soon after that, when a three-judge Supreme Court bench was told that the short order had not been signed, it said that “the unsigned order of the IHC will remain suspended.” So, finally, the restaurant was un-sealed.

Jan. 11 was when a judge told the Capital Development Authority (CDA) and the Islamabad Wildlife Management Board (IWMB) that they had to take over the Monal Restaurant and seal its premises, but only if the restaurant’s owner or manager could leave with his or her own things.

Because the lease for the restaurant had run out, a high court also said that the agreement made on September 30, 2019, by Remount, Vets and Farms Directorate to rent the restaurant from the CDA wasn’t legally binding and was not crucial at all.

People in this case were able to get a copy of a court order signed on the same day that it was signed.

The judge asked for an explanation from the lawyer for the restaurant because he made a false statement. He also wanted to know why the restaurant attached an unsigned copy of his appeal to the letter instead of the signed one.

He told the court that he was not representing Monal Group in the Supreme Court. Sardar Taimoor Aslam is a lawyer for Monal Group.

However, he said that the media might have misreported the Supreme Court’s thoughts on the case.

Monal’s lawyer, Makhdoom Ali Khan, told the Supreme Court that there was no certified copy of the Jan 11 short order from the high court. Because the intra-court appeal was set up twice in the IHC, but the hearing was put off without a reason.

In a short order on a petition about encroachment on protected Margalla Hills National Park (MHNP), the IHC chief justice told the secretary of defence to find out who was responsible for building a golf course. The chairman of the CDA was also told to look into the construction of Monal and rest of the restaurants in the protected areas of MHNP.

They got into trouble with each other when they started paying rent to Messers Remount, the GHQ’s veterinary and farm directorate. The IHC said that the 1912 notification that the directorate used to say that it owned land there was illegal.

The CDA sent a notice to the restaurant last year when the lease was up. However, the Monal Group said that they had been paying rent to the directorate of the GHQ regularly.