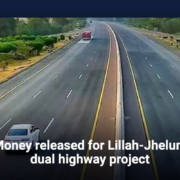 The Punjab government has given PKR 5 billion to the 129-kilometer-long Lillah-Jhelum dual carriageway project, which was reported on August 15.

According to the facts, the project to build a two-lane road costing PKR 16 billion was approved by former Prime Minister Imran Khan in June 2021. It was said that the building would begin in November 2021. The project in question should be done by March 2023.

It has been said that construction has moved slowly since the change in government. Locals were happy that money was given for the project, and it was said that the people who live in the area will benefit from the carriageway being finished on time.
It’s important to know that the project will connect the Grand Trunk Road (GT Road) to the Motorway, which will make it easy to get to Kashmir. The said project will bring economic growth to the area and make jobs available.