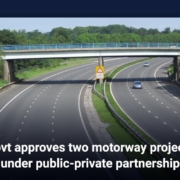 It was a meeting led by Mohammad Jehanzeb Khan, the deputy chairman. The group approved the projects. They also gave the Project Development Facility Regulations of 2022 a good review.

For M6, the board looked at the project proposal from the winner of the bid, which asked for Rs 9.5 billion in capital Viability Gap Funding (VGF). For Rs 307 billion, the M6 project will build a 306km greenfield, controlled access motorway. The winner of the bid offered to pay the government and the National Highway Authority (NHA) a certain amount of money every year for the next 22 years. There are supposed to be a lot of corporate taxes that the project is going to make. The board also agreed to the idea of KRM on a PPP basis. It was told that the project would go on sale quickly. Two years after the concessionaire has reached financial close, the KRM project should be finished. It is a 117-mile (4-lane, convertible to 6-lane) green field project. All three parts of the National Economic Council gave their approval to KRM.

The board also approved the Project Development Facility (PDF) Regulations, 2022, which were meant to help the implementing agencies pay for transaction advisory costs for PPP project development, structuring, and procurement, among other things. Under the law, P3A was already giving PDF help to a number of agencies, including Pakistan Post, who were working on their flagship logistics business project for the private sector.

People learned at the meeting that the M6 was the only missing link in the country’s motorway network that went from north to south. Commuters would be able to use the motorway network to get from Karachi to Peshawar and back again when the project is done. The project is expected to have a huge impact on the economy by promoting tourism, creating jobs, cutting travel time, and saving money, as well as improving the socio-economic development of cities and small towns along the corridor.

A member of the Planning Commission (DCPC) said: “M6 is a very important project that is part of the package the current government has put together for Sindh, and with its completion, the region is going to see a big increase in trade and economic activities.” National Highway Authority (NHA) officials were also told that Sindh was going to pay for land acquisition on behalf of the NHA, and that meetings were held with Sindh provincial government officials about the land acquisition.

The meeting was told that the NHA had started an international competitive bidding process. It had two bids (M/s ZKB and M/s Techno-CMC-ACC) from which it chose. Both bids were able to meet the technical qualifications set out in the bid documents. However, the consortium led by M/s Techno had the best financial terms and was deemed the best bidder.

A concessionaire would start the close financial process for the project after the P3A Board approved it. Then the project would be built and run. In addition to 30 months of construction and 6 months of financial close, the project has a 25-year concession. Under a public-private partnership, the government has agreed to two motorway projects.