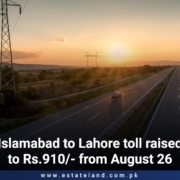 Islamabad to Lahore toll raised to Rs.910/-. From August 26, M/S More, a Frontier Works Organization (FWO) subsidiary, has decided to raise the toll tax rate on the Lahore-Islamabad Motorway (M2) by 10%.

A senior officer from the National Highways Authority (NHA) told that the NHA had inked a 20-year agreement with the FWO. According to the agreement, the FWO will hike toll taxes by 10% on August 26 of each year. The increased toll tax for autos, according to the announcement, is Rs910, up from Rs830 previously.

On all interchanges, M/s More has already displayed revised tariffs that will take effect on the 26th of this month. However, according to the National Highway Authority’s website, toll rates on the Islamabad–Peshawar Motorway (M-1) have remained unchanged since July 2018. The toll fee for cars travelling from Islamabad Peshawar is Rs240.

Read more with EL news: For the completion of airport metro bus project, they accepted a consultant’s bid

Similarly, the toll rates on the Pindi Bhattian-Shorkot Motorway are the same, with a car toll fee of Rs300, while the toll rate on the Lahore-Kot Abdul Hakeem Motorway (M-3) is Rs390, both of which have been unaltered since 2018.

Citizens believe that the rise in toll tax is unjustified because they already pay a high rate. People are becoming increasingly dissatisfied as taxes rise day by day with no relief from the government insight. They are disappointed with the announcement. From August 26th, the new toll taxes will be in effect. Using the highway for travel and connecting cities is commendable, but the rising taxes are a blessing in disguise.