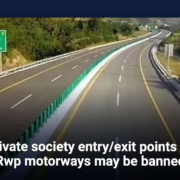 Private society entry/exit points on Rwp motorways may be banned. In a news story from April 27, the divisional administration has asked the Ministry of Communication to put a limit on private housing societies’ entry and exit points on motorways in the city of Rawalpindi’s four districts.

You can read more about it here: 438 illegal residential projects in the city of Rawalpindi will be taken down by officials.

Attock has 98 illegal private housing societies, and Chakwal has 12, according to an official from the government (whose name was not revealed). According to the details, the provincial government has told people to keep green spaces and agricultural land safe. It will start with district master planning, and no housing society will be allowed until the Punjab Local Government Land Use Plan Rules 2020 say that a site can be used for residential use.

FWO has bought the contract for the Rawalpindi Ring Road project, a highway that goes around the city of Rawalpindi.

It was also told not to accept any requests from housing societies for access and exit points to the Peshawar-Islamabad Motorway (M-1) and the Islamabad-Lahore Motorway (M-2). Another thing: Any permission given to housing societies by the National Highway Authority’s executive board will be taken away. This is because if the trend continues, the highways will be turned into local intra-city arteries, which will slow down traffic.