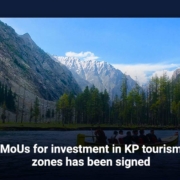 On Sunday, the Khyber Pakhtunkhwa Culture and Tourism Authority signed memoranda of understanding (MoUs) with two companies. They agreed to invest in the integrated tourism zones (ITZs), which would help tourism in the province.

Agreements were signed by Investment Tourism general manager Umair Khattak, the CEO of AH Group, and a representative from Signature Group Investments at the ongoing Property Expo, says a statement from the company.

Read more with EL news : Details of 700 active development projects in Sindh have been made public

The Signature group would build five-star hotels at Ganol and Mankial to help tourists who visit these places. The AH group showed a lot of interest in investing in the ITZ.

He said that KP had a lot of opportunities for businesses, economic zones, tourism zones, mines, minerals, and more. He said that people from both inside and outside the country should invest in the ITZs project.

He said that the government had set up a suitable environment for businesses and investors to move to the province.