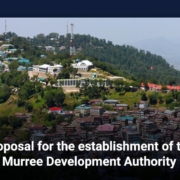 Parliamentarians from these districts, including Latasib Satti, Sadaqat Abbasi, and Raja Saghir, sumit the request to the chief minister. He noted that the three mountainous tehsils need to develop new tourist spots. Murree Development Authority Establishment Proposal is ready.

Sadaqat Abbasi, MNA, acknowledge that KMDA’s application is duly submit. He added that next week, building codes for the 123-kilometer Tourism Expressway would also be formulated.

The commissioner asked the appropriate authorities to present Kotli Sattian and Kahuta by-laws regulating tourism services. He stated that the authorities would enhance public spaces and tourist attractions in Kahuta, Kotli Sattian, and Murree.

All efforts are to make Murree and the surrounding areas an excellent tourism destination. He said, adding that would provide all feasible amenities. Those amenities include such as hotels, motels, children’s entertainment places, picturesque clusters, and even forest areas to assist tourists.

Murree to get new tourism attraction

During a meeting held the other day on Kotli Sattian, Murree Authority, Sadaqat Ali Abbasi, Member National Assembly, and Syed Gulzar Hussain Shah, Commissioner Rawalpindi Division, presided over. The meeting attends by the Secretary Tourism, the Deputy Commissioner Rawalpindi, the Director-General of the Rawalpindi Development Authority (RDA), the Chairman of the RDA, officers from the Engineering Department, AC Kotli Sattian, and other concerned officers.

Numerous recommendations for alternate routes to improve the attractiveness and tourist destinations of Murree, Kahuta, and Kotli Sattian were studied in depth. Additionally, the meeting compared the Murree Municipal Committee and Kaghan by-laws.

ADC Finance emphasized the Kotli Sattian and Murree by-laws at a briefing.  He states that vigorous enforcement of the by-laws is necessary to manage traffic, parking, and other concerns encountered by tourists.

Along with guaranteeing compliance with wildlife regulations during construction, he stressed that he should take stern legal action against rule-breakers.

Abbasi stated that the building codes in Kahuta, Kotli Sattian, and Murree should be similar to those in Kaghan. Section 144 applies for three months in some areas of Murree.  To halt private construction work and allow for the timely completion of road building.

He continued, “Murree is the only tehsil with more than 500 hotels and motels.”

Nearly 170,000 vehicles reached Murree during the Eid holidays, causing traffic and parking challenges for tourists. He also emphasized the importance of establishing a Murree Development Authority.