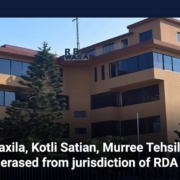 In a newspaper article published on December 22nd, the news featured the six tehsils of Kahuta, Kotli Satian, Kalar Syedan, Gujjar Khan, Murree, and Taxila, among others.

According to the sources, the RDA now controls 64 communities across the country. The chairman of the RDA, Mr. Tariq Mahmood Murtaza, informed the media that a new structure would be put in place. RDA was in charge of 138 housing developments at the survey. There are 80 of them who are legitimate, and there are 58 who have been vetted.

Aside from that, the government would enforce business regulations and even take legal action against illegal housing developments that arise under the new jurisdiction. Only those proposals are permitted to develop publicly advertised to sell the plots.

The tehsils of Taxila, Kotli Satian, and Murree have been removed from the jurisdiction of RDA.