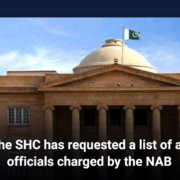 SHC requests the list of all NAB-indicted officials. On Monday, the Sindh High Court instructed the provincial authorities and the National Accountability Bureau to provide reports on all government personnel, BPS-17 and above, who entered plea bargains with authorities, opted for voluntary return, or are now facing trial in NAB cases.

The SHC voiced concern with an earlier report filed by the secretary of services, general administration, and coordination (SGA&CD), noting that the report omitted information about officers in grades 17 and higher.

The panel of Justice Salahuddin Panhwar and Justice Adnan-ul-Karim Memon also directed the secretary to submit a report on officers who entered plea bargains, received VR, or were prosecuted by the NAB but had their referrals or appeals ongoing in courts.

Read more with EL news : The govt is pondering PM’s promised varsity in the G-5

The court said he would submit the report, together with his affidavit, following proper verification and acceptance of responsibility.

It also asked the director-general of NAB-Sindh to submit a list of such instances against officers by Sept 30 after a NAB prosecutor requested additional time to file the report in light of today’s order.

While hearing two identical petitions, the bench noted that the SHC had previously issued several orders on the subject and questioned the SGA&CD secretary’s compliance report filed in December last year, stating that he did not cover senior officers.

In December, the SHC asked the Sindh chief secretary to immediately suspend all employees serving in various sectors of the provincial government who had entered into a plea bargain or elected for VR and to commence disciplinary procedures against them.

The court also has an explanation from the chief secretary for promoting and allowing such officials to continue in their positions in violation of the apex court’s law and directed the NAB chairman.
The special prosecutor to submit a comprehensive list of all Sindh government civil servants who entered plea bargains or opted for VR following the petitioners’ counsel’s racial slur.

It stated that while the Sindh government was required by law to commence disciplinary actions against all such employees, simply imposing modest penalties as a deterrent did not accomplish the law’s aim.

Initially, two petitions were filed against the posting of certain officers who restored embezzled funds to NAB via plea agreement and VR last year. Later, Kanwar Naveed Jameel of the Muttahida Qaumi Movement-Pakistan petitioned the SHC, claiming that about 500 employees who had struck a plea deal and opted for VR with the NAB had been reappointed and promoted in many provincial departments in violation of the supreme court’s 2016 judgment.

SBCA officials have been compelled to face the consequences.

On Monday, the Sindh High Court (SHC) slammed the Sindh Building Control Authority (SBCA) for allowing unlawful and unauthorized development in the city and asked the SBCA’s director-general to take action against personnel.

The division bench, chaired by Justice Irfan Saadat Khan, lamented the SBCA’s failure to act against such projects until the matter reached the courts.

It authorized the SBCA’s executive director to take action against officials who permitted and failed to control illegal and unauthorized structures in their respective areas/jurisdictions.

The bench stated that it could halt unauthorized projects if extreme legal action, including suspension and termination from service, is taken against the officers.

They issued these directions during the hearing of a petition challenging unlawful structures in the Federal B. Area.