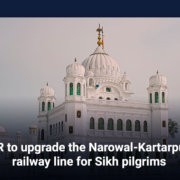 This week, the Ministry of Railways is likely to receive a feasibility report in this regard. It considers several critical aspects of the proposed track, including the cost of construction, maintenance of station buildings, railway gates, signal system, and waiting rooms. All expenses and cost are observed by the higher authority. Maintenance of everything is also being observed to make everything on point.

Since 2003, the section has been inactive due to its dilapidated and faulty lines deemed unsafe for operation. A new railway track will be laid as part of the project at the cost of Rs1 billion.

Take a look at Pakistan Railways’ efforts to generate revenue for the KCR. According to details, the railway authorities decided to provide better facilities and a more comfortable journey for pilgrims.

Meanwhile, they will take extraordinary measures to ensure that passengers have adequate facilities for unloading and loading their luggage from the train and transporting it to and from the station, compared to standard railway stations. The standards of train are highly observed for the ease of passengers so that their travel would be more comfortable for them. The facilities given to them includes their ease and comfort because it is the utmost priority by the management to deliver so far for the passengers. The Narowal-Kartarpur track will provide the pilgrims the facilities and comfort to travel back and forth.

According to sources, PR Chief Executive Officer Nisar Ahmed Memon stated that the resumption of train service would benefit pilgrims and the railways, as it would generate additional revenue. Pakistan Railways (PR) intended to upgrade and rehabilitate the Narowal-Kartarpur track in order to facilitate the visit of Sikh pilgrims from across the border to Gurdwara Darbar Sahib Kartarpur.