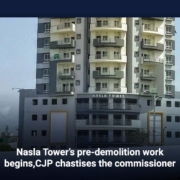 Nasla Tower is undergoing pre-demolition work while the CJP chastises the Karachi commissioner for disobeying court orders. After the Supreme Court scolded Karachi Commissioner Muhammad Iqbal Memon on Wednesday for failing to comply with court orders to demolish Nasla Tower and threatened to hold him in contempt, construction on the doomed high-pre-demolition rise’s phase began.

While hearing several cases involving Karachi’s civic issues, a three-judge bench chaired by Chief Justice of Pakistan Gulzar Ahmed and comprising Justice Ijaz Ul Ahsan and Justice Qazi Mohammad Amin Ahmed directed the commissioner to use all heavy equipment and machinery at his disposal to “immediately demolish” Nasla Tower and Tejori Heights. Additionally, he directed that a report be presented to the court later that day.

The chief judge enquired whether or not the demolition order had been carried out at the opening of the session. Memon said that he required “direction” from the court and desired to make a statement.

“Short and to the point, did you demolish the building or not?” the chief justice interrogated the commissioner, warning him that he could face jail time for contempt of court.

“Are you aware of your location?” While addressing the commissioner, Justice Ahmed made a statement.

“You are perpetually in contempt of court. Is he deserving of the title of commissioner? He is a grade 18 officer who is making these statements.”

Work on the Nasla Tower’s pre-demolition phase begins.
Following the court’s reprimand, preparatory work for demolition began, which included the removal of panels and windows. According to the Karachi Commissioner, heavy equipment and machinery have been deployed on the site.

Memon revealed that demolition of the high rise had begun previously but was halted owing to a lack of safety procedures.

“There was apprehension about the loss of lives and property. It was the Supreme Court’s directive that there be no loss of life or property “‘He stated. “The Supreme Court has ordered that demolition operations be expedited in order to demolish the structure as soon as feasible.”

Nasla Tower, Tejori Heights, has been ordered demolished
On June 16, a three-judge SC bench chaired over by the Chief Justice had initially ordered the 15-story Nasla Tower demolished for intruding on property designated for a service road.

On June 19, the court issued a comprehensive judgment directing the builders of Nasla Tower to reimburse the money to registered buyers of residential and commercial units within three months.

Later, the developer of Nasla Tower filed a review petition against the June 16 order, which the apex court dismissed last month.

On October 25, the SC asked the municipal commissioner to demolish Nasla Tower within a week using “controlled blasting” and provide a report. Following that, companies were instructed to submit their separate demolition charges until two were chosen.

Following that, the district administration served notifications to inhabitants of Nasla Tower earlier in October, telling them to remove the 15-story structure by October 27 or face coercive action from competent authorities. By October 28, practically every family had vacated their apartments.

The municipal administration then approached the apex court for directives to complete the demolition of Nasla Tower, as one business requested Rs220 million for controlled implosion while the other offered a free service by mechanical means.

Meanwhile, Tejori Heights Tower was ordered to be dismantled within four weeks on Oct 29 along with instructions to the builders to compensate allottees within three months. The bench had directed the commissioner to ensure that the demolition and debris disposal processes were completed within the allotted time.

‘The Board of Revenue has devolved into a land-grabbing organisation.’
Meanwhile, a Supreme Court bench heard arguments over the Board of Revenue’s purported allotment of Civil Aviation Authority (CAA) land to a private entity for the purpose of expanding Karachi airport’s terminal.

Read more with EL news : PM AJK emphasises the importance of bunkers near the LOC The Federal Investigation Agency presented the court with its report on the case. According to the report, counterfeit documents were forged for CAA property, and two charges against forgers were filed, along with the arrest of four suspects.

At this point, the chief judge stated that the Sindh government was supporting the landowners.

Meanwhile, Justice Ahsan slammed the Sindh Board of Revenue, declaring that it had become a “qabza group” (land grabbing group) in its own right.

The chief justice observed that clubs had been established on public land and that housing societies would follow suit shortly.

CAA officials in attendance agreed to suspend commercial operations but requested that the mess be left alone. They added that while a club and mess were established for government officers, private citizens were also granted membership. They stated that the club would be closed if the court so ordered.

“You have become preoccupied with earning money and have become oblivious to your work,” the CJP observed.

Saeed Ghani has been called
While hearing a petition contesting the construction of the 16-story Al Bari Tower in Bahadurabad, the SC summoned Sindh Labour, Human Resources, and Information Minister Saeed Ghani, noting that he had refused to demolish illegal structures.

At the hearing’s commencement, the petitioner’s attorney asserted that the facility was constructed illegally on park grounds despite a court order prohibiting it.

When the CJP inquired about the builder of Al Bari Tower, he cited Muhammad Tofeeq and Muhammad Saeed.

Additionally, he informed the court that Ghani had stated that he would retire from his job but would not demolish illegal structures.

Irked by the information, the Chief Justice of the Philippines waved an image of the building during the hearing and inquired: “Inform [me] of what is occurring here. What has become of Saeed Ghani?”

“He has stated that he will resign his office but will not demolish [the buildings],” an enraged Justice Ahsan remarked.

Addressing Sindh’s advocate general, the CJP inquired, “When will he (Ghani) resign?”

The advocate general informed the court that Ghani was unable to attend the hearing and that he would tell the minister of his summons.

The CJP then reprimanded the official, stating that the hearing was in progress and Ghani should have been there.

“We order [demolition], but he refuses to demolish [buildings],” he continued.

The court summoned Ghani and ordered that notice be served on the builders of Al Bari Tower via the New Town station house officer.

Later, Ghani appeared before the SC’s Karachi registry, where he expressed ignorance about the Al Bari Tower development.

He stated that he was present at the court’s direction in an unheard case.

“It may take place tomorrow or the following day,” he continued.