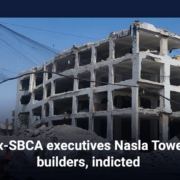 Inspector Zahid Husain Mirani of the ACE filed the FIR on behalf of the state against officials of the SBCA and its master plan department (MPGO), as well as SMCHS office-bearers and members, for violating pertinent provisions of the Pakistan Penal Code and other laws.

A preliminary investigation was launched in response to a Supreme Court mandate. During the course of the investigation, pertinent papers were obtained from the SMCHS, SBCA, Mukhtiarkar of Jamshed and Ferozabad, KMC, and MPGO, as well as witness testimony.

According to the FIR, the management of SMCHS, in collusion with Muzamil Amin Darzi, the plot’s owner/attorney, issued letters in 2006-07 for the allocation of 264 square yards of additional land (meant for amenity/service road) and forwarded the matter to the MPGO for conversion of land use from residential to commercial for 1,044 square yards without proper title documents for the plot (sub-lease of plot was only for 780 square yards).

According to the FIR, an additional 77 square yards of land was permitted in 2010 and the matter was sent to the MPGO for conversion from residential to commercial use for 1,121 square yards. 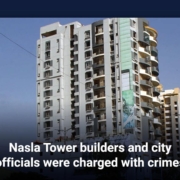 Nasla Tower builders and city officials were charged with crimes. In Karachi, the police filed a case against the builder of the Nasla Tower and officials from a number of government agencies and departments on Monday. This is because the Supreme Court ordered them to.

The Supreme Court ordered the police and the Anti-Corruption Establishment (ACE) to take departmental action and file separate cases against the owners of the building, the Sindhi Muslim Cooperative Housing Society, and other government departments for giving the go-ahead for a building that was against the law.

The bench said that the SBCA officials had broken the law, and each and every one of them could face departmental probes and be charged with crimes under the Pakistan Penal Code and the Prevention of Corruption Act.

The bench ordered that two separate first information reports (FIRs) be filed against the SBCA officials and other government officials at the ACE and the police station where they work. It also told the ACE and the DIG-East to file compliance reports in one week.

A copy of the FIR, which is available on Dawn.com, says that the city commissioner was told to write a report for the court after a number of different departments looked into the tower.

FIR: “When the Karachi commissioner looked into the plots from all departments, it was found that the plot for the Nasla Tower is 780 square yards in the SMCHS papers,” the FIR said.

According to the report, the owner/builder, Abdul Qadir, had built a tower on 1,121 square yards of land, illegally building on 341 square yards of a service road. He sold flats and shops to people. The report said the society had given him 780 square yards.

Read more with EL news : The CDA wants to buy drones to keep an eye on wildlife and forests

It said that the Supreme Court had told the DIG East to file a case against everyone who was involved in the construction, allotment, and mapping of the Nasla Tower. That’s what the FIR said. Records show that the building was built with “mala fide intent and collusion of other departments.”

As a result of the court order, the FIR said that a case would be filed against Abdul Qadir, his accomplice builders, the SBCA chairman and secretary, the SMCHS officials, the MPD director and deputy director, their officials, as well as those of other departments that were involved in the scheme. This is how it works:

Demolition orders have been given for the Nasla Tower in the middle of the city
Nasla Towers was built on land that should have been used for a service road on June 16. A three-judge SC bench, led by the CJP, ordered that the 15-story building be demolished.

The court detailed its order on June 19, and it also told the builders of the Nasla Tower to refund the money to the registered buyers of both residential and commercial units in three months.

In the future, the builder of the Nasla Tower filed a review petition against the June 16 order, which was denied by the supreme court a few weeks ago.

On Oct. 25, the Supreme Court told the city commissioner to demolish the Nasla Tower through “controlled blasting” in a week and write a report. Companies were then told to send in their demolition costs until two were chosen.

Then, in October, the residents of Nasla Tower were given notices by the district administration. They were told to leave the 15-story building by Oct 27 or face coercive action from the authorities. Most families had moved out of their apartments by October 28.

The demolition of the tower finally started on Nov. 24, when the supreme court scolded the Karachi commissioner for not tearing down the tower. After that, the work to tear down the building began in earnest.

‘Despite the difficulties, Nasla Tower is being demolished,’ SC stated. According to reports, the city administration informed the Supreme Court of Pakistan that despite certain ‘unavoidable challenges’ on a daily basis, most notably public protests and threats against the contractor, demolition work on the illegally constructed Nasla Tower was proceeding without interruption due to the destruction of side walls on all floors.

According to informed sources, Commissioner Muhammad Iqbal Memon presented a thorough report to the apex court on Friday detailing the status and obstacles of the demolition process, which was continuing in ‘full swing’ round-the-clock despite the ‘worst case scenario’.

Read more with EL news : The Hyderabad-Sukkur highway will be built soon: Minister

It stated that both lifts had been decommissioned and that the final step, namely the installation of structural columns, had been initiated top-down.

The apex court was informed that more than 400 laborers, seven excavators, 25 demolition hammer machines, and a heavy machinery excavator equipped with a jackhammer were employed in the demolition of Nasla Tower, which was constructed over 1,121 square yards on Plot No193-A in the Sindhi Muslim Cooperative Housing Society at Sharea Faisal.

On Nov 28, the Supreme Court ordered the commissioner to quadruple the number of laborers from 200 to 400 within a week to dismantle the tower.

The commissioner mentioned in his report that certain precautions were also taken to ensure the public’s and property’s safety.

The safety measures included the installation of safety netting around the building’s four sides, the erection of barriers, the establishment of a traffic police picket to direct traffic to the alternate route, and the deployment of police and Rangers. 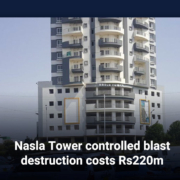 In his report to the apex court, Commissioner Muhammed Iqbal Memon listed the benefits and drawbacks of both techniques recommended by the two shortlisted firms, sources informed Dawn on Sunday.

He informed the SC that no company or government had expertise with controlled implosion destruction in metropolitan areas.

He added a technical expert group was formed to review and evaluate various companies’ expressions of interest.

The SC must demolish the 15-story building of Nasla Tower.

To ensure safety, Hi-Tech Electronics and Machinery/DG Demolition offered demolition by an implosion, requesting 60 days for demolition and post-demolition work.

According to the commissioner’s report, the company provided a cost of Rs220m for destruction, including garbage and valuables.

It said the firm had been given the building plans to draught a destruction plan.

The report further stated that the committee recommended ANI Enterprises to destroy the building using machinery and physical labor.

The firm had given the SC 90 days to demolish and remove all rubbish from the premises, including precious stuff. The corporation has volunteered to pay Rs15m to the government.

The SC was also informed that the Sindh Building Control Authority had been asked to begin pre-demolition operations, remove windows, and provide daily updates of Nasla Tower builders. 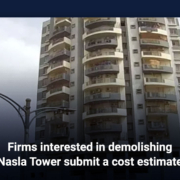 Firms interested in demolishing the Nasla Tower are required to submit a cost estimate. On Wednesday, the six companies that had submitted proposals for the demolition of Nasla Tower to an eight-member committee were requested to submit their respective demolition costs.

Asif Jan Siddiqui, the committee’s chairman, that the final report on the building’s demolition would be submitted to the commissioner on Friday (tomorrow), since interested firms were required to submit the final cost of demolition on Thursday (today).

Read more with EL news : The NA body is dissatisfied with the progress of KCR and ML-1 project

He stated that two local firms that formed joint ventures offered to raze the building with controlled implosion blast, and that numerous other local firms expressed interest in mechanical destruction.

According to the DC, two of the organizations had experience mechanically dismantling 12- to 14-story buildings. He stated that no building in the country has been recorded to have been levelled using controlled implosion blast.

Mr Siddiqui stated that the group, comprising of technical specialists, would consider the advantages and disadvantages of the demolition methods given by several companies.

He stated that the group will suggest the “safest, quickest, and most cost-effective” method of demolishing the structure. Commissioner Iqbal Memon established the committee to award the contract for the building’s demolition.

A request of interest was published in significant media regarding the safest and quickest method of dismantling the 15-story residential structure. The Commissioner’s office in Karachi made the offer.

On June 16, the SC ordered the tower’s removal due to its faulty construction on a service road. The court also ordered the builders to repay registered purchasers of residential and commercial apartments within three months.

On Sept 22, a three-judge SC court dismissed a review petition challenging the building’s demolition and ruled that the owner of Nasla Tower bears the demolition expense; if the owner did not pay, the commissioner should sell the land.

On October 16, the district administration issued vacation notices to inhabitants of Nasla Tower, and on October 26, the Supreme Court ordered the tower’s utility connections to be removed.