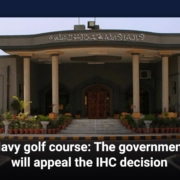 Navy golf course: The government will appeal the IHC decision. The federal government has decided to appeal the Islamabad High Court’s (IHC) ruling that declared the military’s allocation of approximately 8,068 acres of land in Islamabad’s National Park area to be illegal.

According to sources in the Attorney General’s (AGP) office, Additional Attorney General Qasim Wadood has been directed to file an intra-court appeal (ICA) against the judgement of IHC Chief Justice Athar Minallah.

According to sources, Attorney General Khalid Jawed Khan expressed an inability to represent the relevant ministry. Additionally, it is learned that the AGP office has authorized aggrieved departments to retain free private counsel.

Read more with EL news : Seven unlawful structures have been sealed of Murree

The Islamabad Wildlife Management Board (IWMB) has directed the Pakistan Navy to carry out the IHC decision until Friday. On the other hand, the Pakistan Navy has requested additional time until the ICA is resolved.

“You are requested to ensure compliance with the IHC order by removing all fences, walls, and other equipment in the area to vacate the Margalla Hills National Parkland so that it can be restored to its natural state by IWMB,” the letter to Pakistan Navy reads.

Additionally, it is understood that the AAGP, acting on behalf of the government, will appeal to the ICA the January 7 judgement regarding the demolition of the Pakistan Navy club.

“The Pakistan Army’s claim for 8,068 acres of land within the notified National Park area violates the Ordinance of 1979 read with the Ordinance of 1960 and the Master Plan,” an 11-page judgement authored by IHC Chief Justice Athar Minallah stated.

“The claim is also inconsistent with the applicable laws governing the management of lands used by the armed forces. The federal government lacked the authority to authoriZe the directorate’s use of 8,068 acres of land within the notified National Park area,” the judgement stated. “Neither the directorate nor its agents have the authority to own, use, or retain any land within the notified National Park area.”

The court determined that Monal Restaurant’s lease agreement with the Capital Development Authority (CDA) had expired and that its agreement with the Remount, Veterinary, and Farms Directorate, dated Sept 30, 2019, was null and void. The court ordered that the CDA and Islamabad Wildlife Management Board immediately seize possession of Monal Restaurant and seal its premises, subject to allowing the restaurant’s owner/management to remove their property.

The order stated that the CDA chairman would conduct an investigation to determine who was responsible for the construction of Monal Restaurant and other structures within the protected area of the National Park in violation of the 1997 Act, the 1960 Ordinance, the 1966 Ordinance, the 1979 Ordinance, and the regulations promulgated under the respective statutes.

“The authority’s board of directors shall then proceed against the officials in accordance with applicable law.”

The secretary of the Ministry of Climate Change and the director general of the Environmental Protection Agency shall conduct a joint survey of Monal Restaurant and other nearby structures to determine the extent of environmental damage and then take any necessary measures and actions to avoid further environmental degradation.”

Additionally, the court stated that the Pakistan Navy encroached on state land, including the notified area of the National Park, by establishing an unauthorised and illegal golf course outside the allocated Sector E-8.

“The construction of a golf course on the encroached land was and continues to be illegal, lacking legal authority and jurisdiction.

“The alleged Navy Golf Course shall be sealed immediately and its ownership transferred to the Capital Development Authority and the Islamabad Wildlife Management Board.”

“The Ministry of Defence secretary shall conduct an investigation and hold accountable officials/persons involved in trespassing and encroaching upon state land to establish the Navy Golf Course unauthorisedly and illegally.” “The secretary of the Ministry of Defence shall conduct a forensic audit with the assistance of the Auditor General of Pakistan to ascertain the loss to the exchequer and recover the funds from the officials/persons found responsible,” the order stated.

It stated that the commission’s report and recommendations, which are an integral part of this judgement, shall be immediately examined by the secretary of the Ministry of Climate Change.

Additionally, the court stated that the commission, which Dr Pervez Hassan chaired, was renamed the Implementation Commission.

The secretary of the Ministry of Climate Change shall coordinate with the Implementation Commission’s chair. Following deliberations, the recommendations shall be presented to the federal government, specifically the prime minister and cabinet members, for approval. “The armed forces’ prestige and unique status are critical to the Pakistani people. The Secretary of Defense and the Chairman of the Capital Development Authority shall ensure that no controversy arises in the future regarding the non-application of enforced laws within the three sectors designated for the use of the

The armed forces’ branches in the Islamabad Capital Territory,” the order stated.

Additionally, the order stated that officials must submit compliance reports to the court’s registrar within 30 days of the order’s date. According to the order, biodiversity, ecosystems, and natural habitats all contain life and thus contain living organisms.