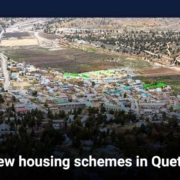 Quetta is the fifth largest city of Pakistan and is also known as the Fruit Garden of Pakistan. The reason to known as the Fruit Garden of Pakistan is the diversity of its plant and animal wildlife.  Quetta is positioned at an approximate elevation of 1,680 meters (5,500 ft) above sea level. Its population is between 896,090 and 2.8 million. It is a trade and communication between Pakistan and Afghanistan. Quetta lies between the Bolan pass. It has significant variations between the summer and winter temperatures with a semi-arid climate. Average temperature ranging between 24-26 °C (75-78 °F). They have been working in several housing schemes which are developed, and some are under the process. In this blog, we are going to discuss the housing schemes in Quetta. Given below is the approved list of housing schemes in Quetta. We will be discussing in detail each of the following.

This housing scheme is encouraged by the idea of providing luxury houses at competitive market prices. They offer three year’s easy installments and enable the buyers to purchase plots of different cuttings without considering price issues, location, or purchasing power a second thought. Qasim Bagh town located in Quetta only at a distance of 2.5 km from the Baleli and 15 minutes drive from Quetta International Airport. The Quetta Development Authority approves it. Qasim Bagh Town provides various facilities such as road and transport, electricity, parks, green area, shopping mall, waste collection, schools, masjid, and hospitals, which can help you live a luxurious lifestyle and fill your all needs. The best thing about Qasim Bagh Town is various towns surround it.

You can read more about the new housing scheme in Gujranwala .

Zarghoon Housing is the most well-planned society in Quetta, but still, it has its issues. It has seen great progress over the years. The roads of Zarghoon housing schemes are well maintained, which is the thing that separates it from other private projects in Quetta. They provide all the facilities of hospitals, educational institutes, and parks that are well-maintained and completed. Ownership hasn’t been granted yet, due to which there is not much development. The plots are being traded on the asking premium. If anyone is planning to invest in Quetta Zarghoon Housing Scheme is the best among the others.

It is located on Chashma Achozai Road, which is adjacent to Chiltan Housing Scheme. The development is under process. The ownership has been granted, and a few homes have already been built. Society has power and gas, and the roads have seen a lot of work; however, they are under construction, which will be constructed soon. There is a problem regarding the sewerage and water systems that haven’t been developed. The development of the Garden Town still needs some time to maintain its structure and facilities well. It has been divided into five different blocks starting from A to E.

Quetta Avenue is situated near Spinny Road, close to Pak-Turk School and College. The development has been started, and the roads are set to be 40-and 80-feet wide. Society has power, but it does not have gas yet. Development is required. Most of the things are under construction. They need to focus on that. There aren’t any plans for the water and sewerage system.

Defence Housing Authority Belongs to everyone. They offer a high-quality, well-organized, and secure living and working environment to every Pakistani citizen residing in Baluchistan. DHA Quetta provides a safe living and friendly business environment to its people. They also offer sustainable infrastructures and generate environment-friendly development. Moreover, DHA Quetta provides all the basic facilities of the individual, such as health, education, and entertainment sectors. One thing more I will like to mention is regarding their socio-cultural fiber by connecting different communities.

Also read: Top 5 housing schemes in Gwadar for investment in 2021

These are some of the best housing schemes in Quetta. They still require development. As I have earlier mentioned, some of them are under construction. A development process is needed. They need to increase their facilities further to attract more investors. Specifically, they need to work on roads and the sewerage system. If you need to know about the best housing schemes in Islamabad, you can contact us at Estate Land Marketing. Feel free to share your queries.