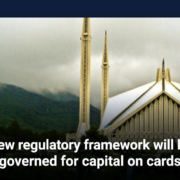 New regulatory framework for capital on cards. As per Ali Nawaz Awan, Special Assistant to the Prime Minister (SAPM) on Capital Development Authority (CDA) Affairs, a new regulatory framework for the federal capital is being developed to consolidate various organizations, including the civic agency, Securities and Exchange Commission of Pakistan (SECP), cooperative departments, Companies Acts, and others into a single entity.

He informed a news conference that the action was being taken to prevent urban flooding such as the one that occurred in Sector E-11 recently, which resulted in the deaths of a mother and her kid. A new regulatory framework is the need of time.

He stated that a summary of the new regulatory framework had been given to the federal cabinet and expressed the hope that it would be enacted into law as soon as it received significant approval. Furthermore, he insisted that plans were in the works to conduct a hydrological survey of the various sectors in question.

The flooding was caused by the nullah being narrowed to 18 feet from its natural domain of 40 feet instead of its natural realm of 40 feet. It has also been discovered that civil society has been sluggish to clear the nullah, even though this is their usual job.

As indicated by Awan, the nullah would be returned to its previous shape by removing all of the illegal structures built on its banks to reduce the likelihood of urban floods occurring in the future. He pledged that no matter how many encroachments were constructed on this nullah with illegal authorization and force, or how many were developed due to the CDA’s, cooperative society’s, or any other agency’s inaction, they would all be demolished.

Read more with EL news : A development strategy has been developed for all districts in KP: CM