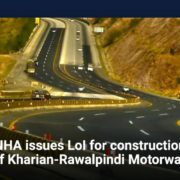 The authority has chosen Techno-Matracon as the successful bidder for the motorway project, which is being built through a Build-Operate-Transfer Public-Private Partnership. According to the details, the total cost of the project was PKR 85.6 billion, and PKR 6 billion is needed as Capital Viability Gap Funding (VGF) while the project is being built.

Also, the contractor will give NHA PKR 112 billion over the next 25 years as its share of the income. It was said that the company that won the bid offered to build the highway for half as much as the other companies. Noting that Techno-Matracon has also been given contracts to build the Sukkur-Hyderabad Motorway is important.