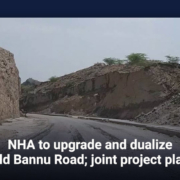 News from September 29 says that the National Highway Authority (NHA) is working on the 83-kilometer-long Old Bannu Road in the District Bannu of Khyber Pakhtunkhwa (KP) to make it wider and better.

A person from NHA, whose name was not given, said that the project in question was part of the Indus Highway and would be finished in stages. In the first package, the Frontier Works Organization was given the job of building the 40-kilometer Domail-Khurram section (FWO). 59% of the work has been done so far.

The contract for the second package, which is the 35-kilometer section from Khurram to Krapa, was also given to FWO. Due to a lack of money, the work is only 58% done right now. M/s NCC-IKAN-HRPL joint venture won the contract for the 8-kilometer Gaandi Chowk-Sarai Naurang section of the third package. The work on that part of the building is done.