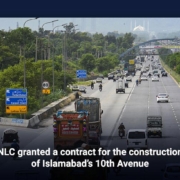 NLC will be granted a contract for the construction of Islamabad’s 10th Avenue
The municipal administrators are about to award a contract to the National Logistics Cell to build a huge road project — 10th Avenue (NLC).

Four days after the CDA board approved awarding the contract to a government-owned corporation, the authority held a competition between Frontier Works Organisation (FWO) and the NLC on Monday. It determined that the latter’s proposal of Rs10.2 billion was the lowest, compared to FWO’s bid of Rs10.9.

“We will give the contract to NLC when all code requirements are met,” a CDA official said, adding that the authority had invited two other government-owned entities — Railcop and National Construction Company —, but they declined to participate.

10th Avenue will be built in two parts, according to CDA authorities. The first phase will see the construction of a five-kilometer road connecting I.J. Principal Road/Katarian Bridge to the Srinagar Highway near the edge of G-9 and the starting point of G-10. Once work on the project begins, it will take 21 months to complete.

According to officials, the second phase will be erected between Srinagar Highway and Margalla Road in the future.

On Wednesday, the Executive Committee of the National Economic Council (Ecnec) approved the Rs12.1 billion building of 10th Avenue from I.J.P Road to Srinagar Highway.

NLC is constructing two significant CDA projects: the 7th Avenue Interchange and the enlargement and upgrading of I.J.P Road. The two projects are currently in development. The FWO is building Margalla Road.

According to CDA sources, the CDA’s management focuses on giving large contracts to government organizations to prevent contract-related issues.

“These two firms (FWO and NLC) are fully capable of completing the projects on time. Several projects have been delayed in the past due to contractors’ delaying tactics; thus, we are hopeful that all-important contracts will be completed on time,” an official stated.