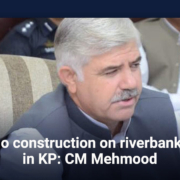 Swat: Khyber Pakhtunkhwa (KP) Chief Minister (CM) Mehmood Khan said on Sunday, August 28, that houses and businesses will not do construction along riverbanks. This was reported by news sources.

According to the minister, the government will strictly enforce rules against encroachment and go after people who build without permission. He said this while he was visiting areas hit by floods in Swat, Kalam, Mingora, and Matta. He said that the flood had made a mess of the area and that cleanup would start as soon as it stopped raining. He also said that the government will do a survey to figure out how much damage rain has caused.

It’s important to note that the country has had more rain than usual during the monsoon season, which is usually a dry time. The rains have destroyed homes and ways of making a living, which affects about 33 million people directly. No construction on riverbanks in KP.