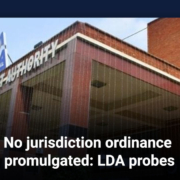 The body concluded a meeting on Sept 22 after discussing the LDA’s jurisdiction over master planning for the entire Lahore division or just the metropolitan areas.

However, LDA DG Ahmad Aziz Tarar stated that they would rectify the matter shortly after extending the ordinance. “A Punjab Assembly resolution has extended this. However, I do not have access to the final date of extension at the moment,” he added.

There has been no ordinance establishing jurisdiction: LDA investigates.

According to an official source, the governor’s April 13 promulgation of the 2021 (amendment) ordinance amending the LDA Act, 1975, was not enacted before its expiration date. “Subsequently, we learned that it was extended in August and will expire on October 1,” a senior LDA official told Dawn on Sunday.

“And if this is not implemented or extended by October 1, the LDA’s jurisdiction over the Lahore division (which includes the Lahore Metropolitan Area and the districts of Kasur, Sheikhupura, and Nankana Sahib) will be reinstated.”

According to the meeting minutes conducted to review compliance with the LDA governing body’s sixth meeting of the year on August 17, participants discussed concerns connected to the Lahore division’s master planning.

“It discussed that the LDA’s (under the ordinance) powers would be limited to the Lahore metropolitan areas. However, the meeting resolved that should consider the views of stakeholders from three districts (Kasur, Sheikhupura, and Nankana) as well as legal considerations relating the LDA’s master plan for areas outside its jurisdiction”, the minutes stated.

The authority formed a committee comprised of the secretaries of housing, local government, law, and the LDA’s general manager to investigate the situation and make suggestions as soon as possible. According to Article 128 of the constitution, the committee deliberated and determined to revisit the question following the ordinance’s passage on this subject. However, the committee advised that the LDA remain the master of Lahore.“

It may recall that following the ordinance’s promulgation, the local government department directed the LDA to hand over the entire land use and private housing scheme record for the districts of Sheikhupura, Nankana Sahib, and Kasur via a letter titled ‘Curtailment of Jurisdiction of LDA concerning land use and housing schemes viz-a-viz Nankana Sahib, Sheikhupura, and Kasur.’ Accordingly, the LDA began turning over the whole land use/private housing scheme/subdivisions record to the relevant defunct local government field formations in these districts following the regulation and direction.

They expanded the LDA’s jurisdiction in 2013 to include the entire Lahore division in response to growing complaints about the mushroom growth of illegal housing schemes, commercial buildings, and inappropriate land use in Kasur, Nankana, and Sheikhupura. The goal was to regulate all such activities through uniform laws, rules/regulations, and policies rather than TMAs. However, the difficulties in these areas have remained unresolved due to various legal, technological, and administrative challenges.

Though the then-governing PML-N administration was satisfied with the ruling, the PTI government immediately began working to repeal most PML-N orders/policies, notably the LDA (Amendment Act) 2013, which enlarged the authority’s jurisdiction to include additional districts. Finally, on April 13, Governor Chaudhry Sarwar issued an ordinance amending the LDA Act, 1975, removing Sheikhupura, Kasur, and Nankana Sahib from the LDA’s jurisdiction.

Building/zoning regulations: Following the governing body’s meeting decisions, the LDA administration has revised building and zoning regulations-2019. Amendments (Ramps and Toilets for Persons with Disabilities) would require such facilities accessible to individuals who use wheelchairs and those with other disabilities in all buildings other than residential ones.