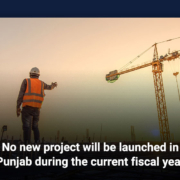 No new project will be launched in Punjab during the current fiscal year. Due to a lack of money, the government of Punjab has decided not to start any new development projects in the province during the fiscal year 2021-22, which ends on June 30, 2022.

The tendering process for the Rs4.8 billion Kutchery Chowk project in Rawalpindi will be put off.

Sources told Dawn that the provincial government had said the district governments and city councils to finish all ongoing projects by the deadline.

They said that the previous government had set aside money for new development projects a month before it was thrown out. It has made it hard for the current government to deal with money problems.

Officials have stopped the bidding process for the Rs4.8bn Kutchery Chowk project.

The sources said that usually, funds were used up in the last month of each fiscal year to keep them from running out. But the current government wants to save the money so it can help people who are being hurt by rising prices.

The government has told the district and city governments not to send out work orders or start the bidding process in May or June. All 36 districts in the province have been told about the decision.

“The government wants to pay attention to inflation, so it has decided not to start any new projects until the new fiscal year,” a high-ranking district government.

He said that the PTI government hasn’t started any big projects in the garrison city in three years. But work on the Rawalpindi Ring Road began in March, and the Kutchery Chowk project was given the green light.

“The Rawalpindi Development Authority (RDA) has stopped working on the Kutchery Chowk project, and the tendering process will begin in the next fiscal year,” the official said.

The official said the previous government was slow and wanted to start work on big projects before the general elections in the next fiscal year. He said that the previous government also didn’t have enough money and tried to get private investors to help, but no one was willing to put money into the Rawal expressway or other projects.

“Yes, we’re working on getting Kutchery Chowk and other projects off the ground. “But it’s likely that they’ll be out in the next fiscal year,” said Mohammad Irfan, a spokesman for the RDA.

He said that work on a two-story flyover at Kutchery Chowk would start in the next fiscal year. After that, he said, work would also start on the Defence Chowk project.